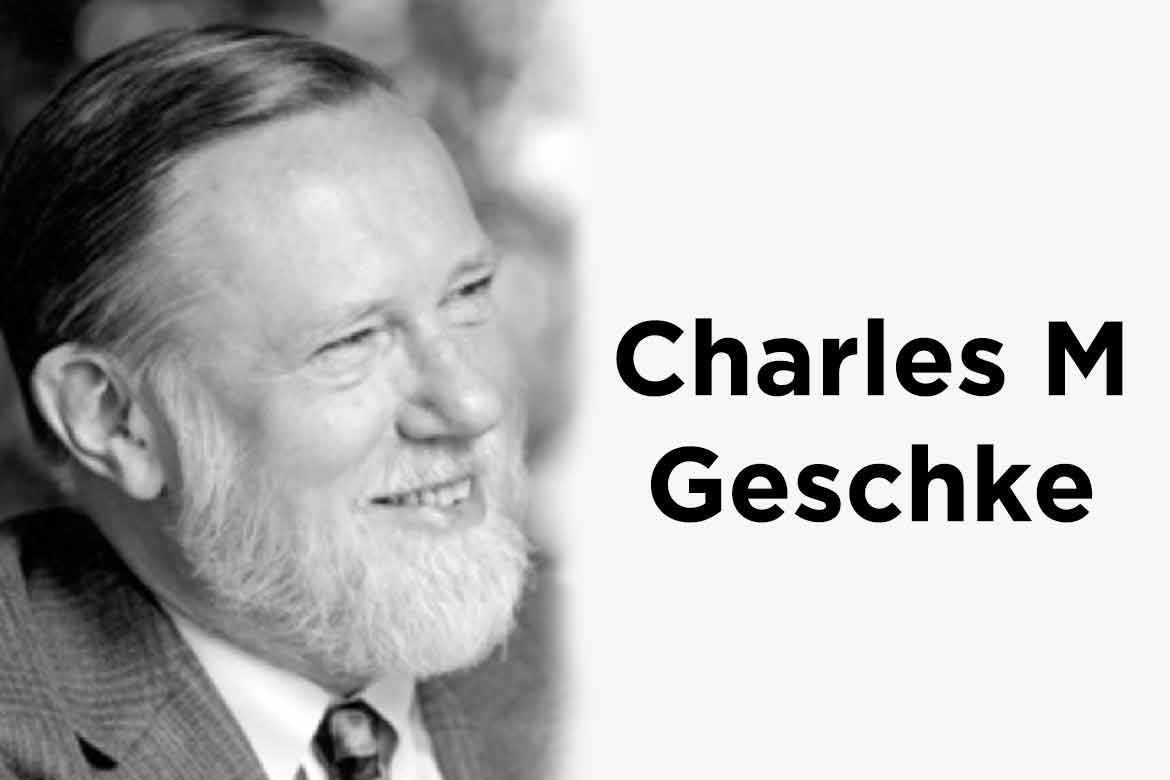 In a heartbreaking news yesterday, we came to know that Charles M Geschke i.e the co-founder of Adobe is no more. He also helped in the invention of PDFs. This is a big loss to the tech world and thus today, we shall look into the life of the man who forever changed the face of desktop publishing.

Charles M Geschke was born in Cleveland, OH on 11th September 1939. Not much is known about his early life, except the fact that he went to Saint Ignatius High School. His accolades aren’t hidden from anyone though.

Geschke was a Catholic, and met his wife Nancy “Nan” McDonough, also a graduate of Catholic institution. They met at a religious conference on social action in the spring of 1961 & married in 1964. In 2012, they received the St. Elizabeth Ann Seton Award from the National Catholic Educational Association (NCEA) for their contributions to Catholic education.

Geschke’s mother was a bankruptcy court paralegal. Both Geschke’s father and paternal grandfather worked as letterpress photo engravers. Geschke’s father helped during the early days of Adobe by checking colour separation work with his engraver’s loupe. Geschke described his father’s acknowledgment of the high quality of the halftone patterns as “a wonderful moment”.

Geschke possesses an AB in Classics (1962) and an MS in Mathematics (1963). He attained both these from Xavier University itself. Moreover, there was very little gap between the completion of his Masters and the beginning of his teaching career. In fact, it was from 1963 itslef that he started teaching Mathematics in John Carroll University. He went on to teach there till 1968.

Geschke went on to pursue a PhD in Computer Science in 1972, from Carnegie Melon University. He can thank William Wulf for this, as it was the latter’s advice that prompted Geschke to pursue the PhD. In fact, they both grew so close that Geschke even became the co-author of Wulf’s book The Design of an Optimizing Compiler (1975).

There was no looking back after this. Charles M Geschke went on to create many successful ventures, once he entered the professional arena.

His PhD completion in 1972 seamlessly transitioned into his first job. He worked in the Palo Alto Research Centre (PARC) which was owned by Xerox. Initially, he was asked to work on building a mainframe computer. Furthermore, he also worked there on Programming Languages. During this time, he ended up building tools; tools that would eventually come into use to build the XEROX STAR WORKSTATION.

Though impressive innovations, the game changing one came at 1978. Geschke formed the Imaging Sciences Laboratory at Xerox PARC. Here, he conducted research on: –

Furthermore, he went on to hire his long term research partner John Warnock, with whom he developed INTERPRESS. This was a page description language. Additionally, it could describe formats as complex as typeforms. Both hoped that this would easily convince Xerox to commercialise this invention. However, when Xerox did not realise its Commercial value even after convincing, Geschke and Warnock resigned.

They then went on to co-found ADOBE Systems in 1982, with the first work station being established at Warnock’s garage. Here, they worked on improving Interpress, which now became Adobe Postscript. Call it a happy co-incidence but this got the apt hardware to run on, in the form of Apple Computer ((including Apple’s new LaserWriter printer). These 2 together formed the world’s first “Desktop Publishing (DTP) System”.

In this, one could type and compose documents on a PC. Moreover, they could also see a print preview exactly similar to the real printed output. This means that users could now expect printouts looking completely like how it’s shown on screen. This was possible due to the WYSIWYG Process a.k.a What You See Is What You Get. This new approach allowed business users to greatly improve the quality and efficiency of their document production, spawning an entire industry.

Thus, this was how Geschke revolutionised modern printing and publishing.

Awards and Accolades of Geschke

The reason we include this incident is because it’s an important part of Geschke’s story. It was in the Adobe Parking itself that 2 armed men kidnapped him at gunpoint and held him for 4 days.

Reports say that the kidnappers held Geschke hostage in a bungalow in Hollister. The F.B.I monitored the phone calls which the kidnappers made to Geschke’s wife, demanding a ransom. In fact, it was while picking up the ransom that the authorities nabbed the kidnappers. Eventually, after 4 days in captivity, the F.B.I rescued Geschke.

Charles M Geschke’s contributions are evergreen and will continue to revolutionise modern information processing and publishing in the coming years.